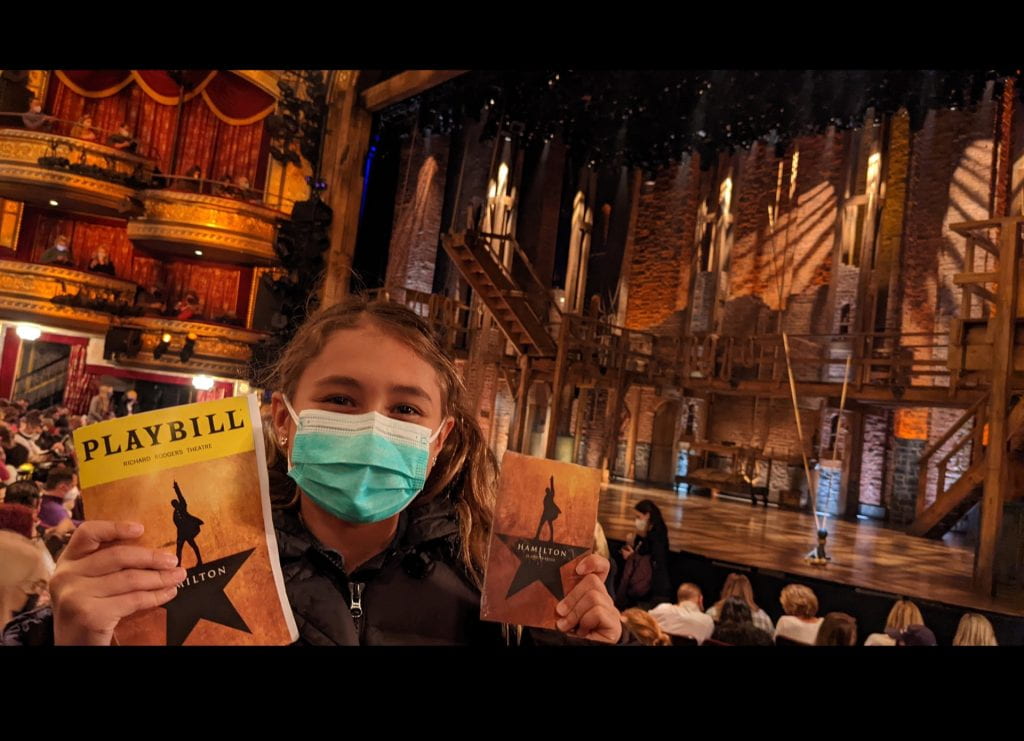 Broadway this, Broadway that. I’m sure that you have heard the word Broadway at least one time before. The Broadway Theater, more commonly known as Broadway, are theatrical performances shown in 41 theaters located in the theater district and the Lincoln center along Broadway, a town in Midtown Manhattan, New York City.

Broadway was founded in 1750, where Walter Murray and Thomas Kean established the Theater on Nassau Street. They performed Shakespeare plays and Opera Ballads.  The Theater on Nassau Street sat 280 people. As the shows got more popular, more and more theaters were built. Many of the shows performed in the 1700s and the 1800s were Shakespeare plays such as Hamlet. In 1866, the first musical premiered, it was called The Black Crook, it was a shocking five and a half hours long!

In the 1900s is when Broadway really took a turn for the better, they started installing electric signs outside of the theaters, it was nicknamed The Great White Way, and the broadway show Lightnin’ by Winchell Smith and Frank Bacon, was the first ever Broadway show to reach 700 performances. By the end of the 1920s, cinemas were a rage throughout America, actors, actresses, producers, and directors worried if the new invention, the cinema, would shut down Broadway. Thankfully, Broadway stayed open.

However, in the 1960s-1970s, Broadway lost lots of its audience, theaters, and shows. However, in the 1980s, Broadway came back strong! Its longest running show, Phantom of the Opera opened. Over the years, Phantom of the Opera has made $1.30 billion dollars! Also, in the 1980s a man named Joe Papp who established The Public Theater, led the “Save the Theaters” campaign, which helped bring more resources, audio, lighting, technical crews, etc. to the Broadway community.

In the 1990s and 2000s, Disney opened (over the years) 17 Broadway shows, including Beauty and the Beast, Aladdin, The Lion King, Newsies, and much more. In the 2000s, Legally Blonde,  Macbeth, White Christmas, Thoroughly Modern Millie,  Les Miserables, and other classics joined Broadway and helped Broadway get more audience members and theater fans. The Broadway theaters also held many popular 2000s and 2010s actresses and actors such as Sutton Foster, Hugh Jackman, Victoria Clark, Neil Patrick Harris, and Laura Bell Bundy who brought joy, laughter, and tears to the audience. Over the years, Broadway has had its ups and downs, but overall, Broadway has improved the American theater. 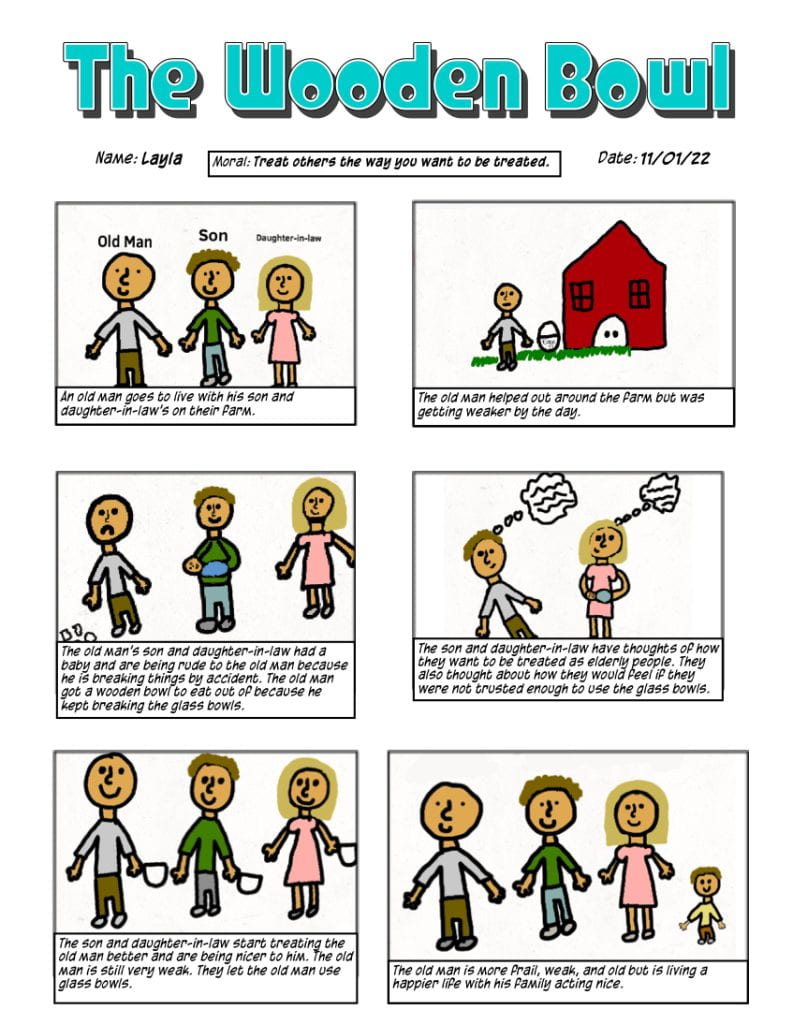 Have you heard of Wisdom Tales? Wisdom Tales is a book written by Heather Forest. Wisdom tales are about different folk tale stories from around the world. My personal favorite Wisdom Tale is The Wooden Bowl, which is about an old man who moved in with his son and daughter-in-law. He tried to help out around the farm, but he was getting weaker by the day. He started dropping things and his daughter-in-law got mad and took away the glass bowels from him. His son and daughter-in-law had a baby and started ignoring his father. They gave him a wooden bowl to eat out of since they didn’t trust him to use the glass bowls. They soon realized that when they are old and frail they want to be treated well and how they want to be trusted enough to use a glass bowl. Lastly, they start treating his father much better, and they become one big happy family. The moral is treat others the way you want to be treated. This story originated in Germany, Europe.

In my Language Arts class, we had to make a project about a Wisdom Tale in the book. I chose The Wooden Bowl, which in the last paragraph I explained to you about. I made a comic for my project and I attached a picture to this blog post. I made the comic in Comic Life 3 which is an app that helps you make comics. I drew my pictures in the app Paper and inserted it into Comic Life 3. I hope you like it! Thank you for reading!

On an early, crisp Thursday morning, we boarded the clean, fresh, blue bus to go on the adventure we had all been waiting for, Camp Hanes. The bus was full of excitement and nervousness as for some of us, this was our first time away from home, but not for me. I have been away from home many times before, but this was my first sleep away camp. When we saw the first glimpse of the rocky, gorgeous mountains, we all looked in awe as we drove into the green, cheerful camp.

Thank you so much to Cammi, Kayla, Dem, Sarah, and Bella for making our Camp Hanes trip super memorable and fun! Without them, our trip would have not been the same, for we do not know the camp like they do! They helped some of us overcome our fears of things we have not tried. I am very proud that Kayla taught me how to shoot an arrow in archery. Thank you so much Camp Hanes staff for making us 6th graders happy! 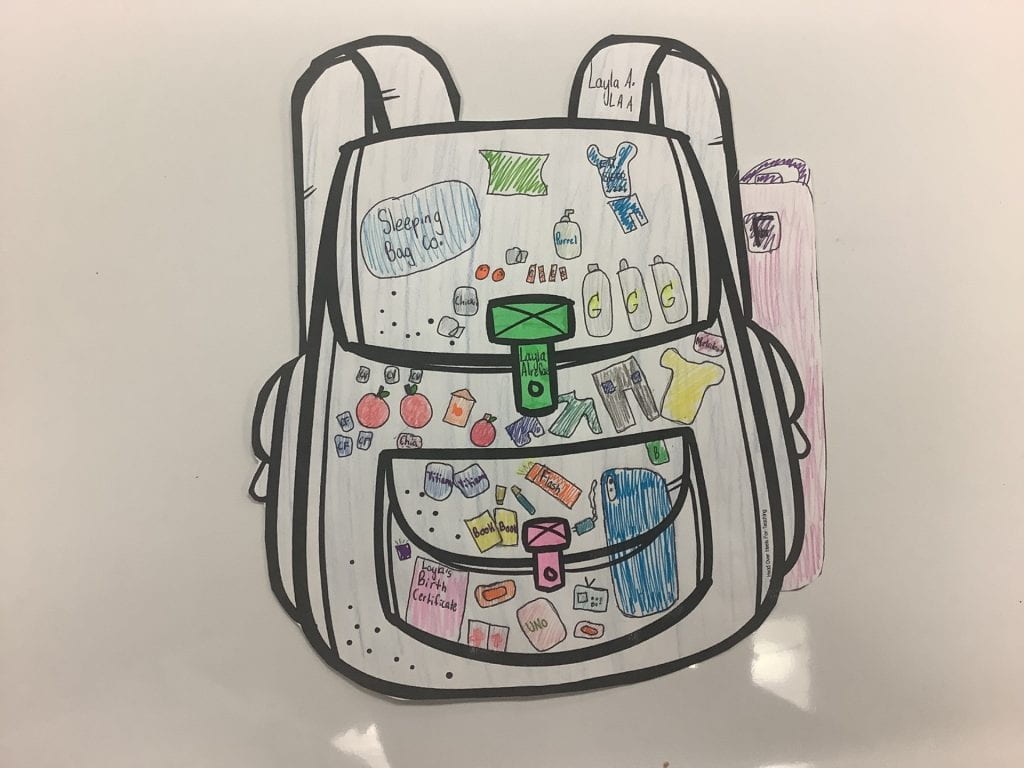 This summer, I read a book called Finding Someplace written by: Denise Lewis Patrick. In the book, Reesie (the main character) had to collect valuable things she needed to survive Hurricane Katrina (2005). Valuable things such as important papers , her water bottle, and very special book her neighbor gave her.. After she quickly packed her bag, she ran to her neighbor Miss Martine’s house to evacuate. Unlike Reesie, I would be prepared and pack ahead.

If I had to bring a bag full of important and valuable things like Reesie did, I would bring a big hiking bag to hold everything in. Next, I would separate what I would bring into sections. The first section would have electronic items, such as my phone to contact my parents if I got stranded, a portable charger to charge my phone, a normal flashlight for the night, a portable tiny radio, and batteries for the flashlight and radio.

The next section would be foods and water. From what I remember, Reesie brought a couple snacks, but I like food so I brought a lot of food. I would bring: 3 canned fruit, 3 canned vegetables, to get healthy food inside of me. a full giant water bottle, 3 Gatorades (for electrolytes), chia seeds (for protein), 4 granola bars, 2 tiny packs of Goldfish, 3 apples, 2 oranges, one little loaf of bread, and a pack of canned chicken. I would eat the canned chicken the first 3 days so it won’t get bad.

The next section would be hygiene. Reesie did not bring things like her toothbrush or hand sanitizer, so I remembered to bring them. Other items I would bring for hygiene would be my toothpaste to brush my teeth, 2 toilet papers, 2 packs of wipes, 2 first aid kits. In the last section, I would pack extra items: like my birth certificate (in a waterproof folder), just in case someone in the officials need it. The card game Uno to play in our freetime, 2 books to read, my vitamins to keep my body healthy, melatonin in case I can’t fall asleep, a taser in case someone tries to steal me, 2 pairs of extra clothes, 1 pair of pajamas, a pillow, and a sleeping bag attached to my bag.

Lastly, after all those things are in my bag, I would be prepared to leave. I suspect I would not have to restock my food for at least 1 week. If you are wondering, I will be traveling with my family so they will pack their own bags. I would also ask my mom to bring a wagon and a tent to sleep in. Now the question is, how will I hold it all?

Back to top
Skip to toolbar